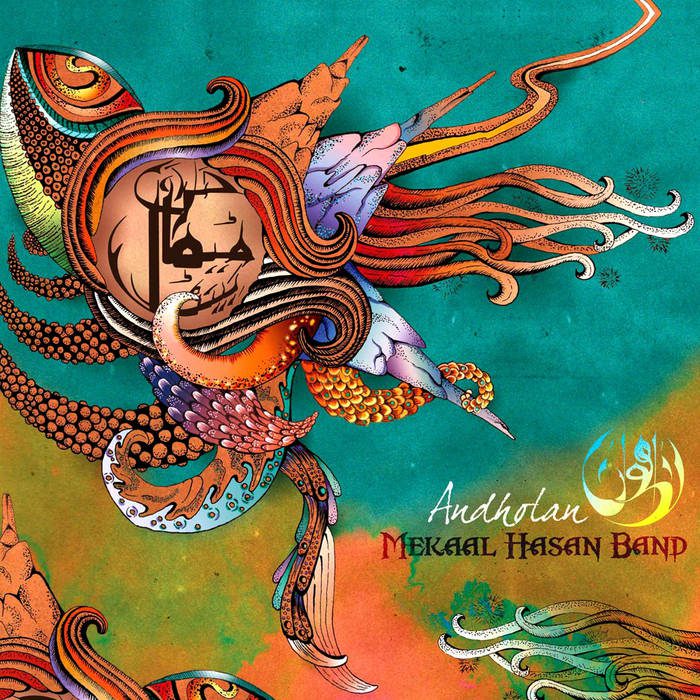 This South Indian Raag, Champakalli, is also known as the Lydian Flat 7 Scale in Western music. A traditional classical bandish based on the raga set out over a gorgeous palette of guitar tones and flute textures, takes you through an aural landscape that is all at once haunting, alluring and dark.
Buy Track

Based on the popular Bheem Plassi Raga, Bheem is set amongst a musical journey that has various twists and turns,each taking the listener through a tripped out, psychedelic experience.
Buy Track

This Bulleh Shah (1680-1757) sufiana Kaafi from the 18th century is set to a very upbeat vibe, musically taking the listener on a inviting journey of catchy hooks, riffs and solid rock grooves
Buy Track

Sindhi Bhairvi features stand out ensemble playing from all members and features much syncopated call and response from the dynamic and super tight rhythm section.
Buy Track

Mehg, based on the raga of the same name, and also mythically, reputed to bring about rainfall, evokes a sense of shimmering rain and the swill of water. Adding to this sense of effortless fluidity, is the very ambient and operatic treatment given to the music, making the track seem like an invocation to the heavens to open.
Buy Track

With a haunting, dreamlike musical setting, the beautiful Kinarey, based on the Aiman Raga, (also the Lydian scale in the West) closes the record.
Buy Track

When a multinational group with eclectic influences gears up to put out an album, you can bet that it’ll be a masterpiece of a release.

Mekaal Hasan Band’s (MHB’s) third studio album, Andholan is the first release of theirs to feature a new and improved Indo-Pak line-up that features the recorded debut and introduction of Indian singer, Sharmistha Chatterjee on lead vocals. Mekaal Hasan and Mohammad Ahsan Papu, the founding members of this critically acclaimed music group, reprise their roles as writing and composing partners, showcasing an innovative and progressive approach to songwriting. It is this kind of progressive spirit that sees the group incorporate the sounds of classic jazz-rock groups from the 70’s with classical/Sufi music melodies; only to supercharge that sonic soundscape with a healthy dose of rock fusion making ‘Andholan’ a thoroughly exquisite album.

From the adrenalin-pumping introductory song “Ghungat” to the tranquility-evoking, conclusive track “Kinarey”, this album will leave you in a state of spellbinding bliss.

Thanks a lot everyone!! 🙏❤️#mekaalhasanban

Find the link in bio to listen to "Sanwal (Live At

Sanwal (Live At Baroda) - Now Available on All Pla

Find the link in bio to listen to "Sajan (Live At

Sajan (Live At Baroda) - Now Available on All Plat

Find the link in bio to listen to "Ranjha (Live At